Some fun news, I’m officially going back to college for Physics!

I got my first homework assignment, and one of the questions was on double slit interference. I figured I’d make a little demo.

The double slit experiment was one of the most famous experiments in history. I don’t want to cover it here since it’s been covered a million times.

But it blows my mind that scientist have done the experiment by firing single electrons and it still worked. Nature is crazy.

So I made a little tool to play with some values of the experiment.

Here’s a diagram of the setup: 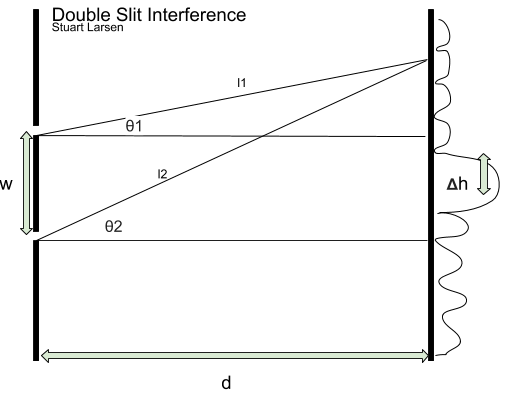 I assume there’s two point light sources, and instead of using the standard \( d sin(\theta) = m \lambda \) equation for finding the maxima, I calculated the wavelength of each source independently, and then just add the phase to calculate intensity.

Some fun things to note:

Probably nothing. It was a fun little exercise. Although it ended up taking the better part of a day to complete. (I was playing with Preact for a bit, but I love angular’s two-way data-binding. So I switched back.)

I’ve also been working on a computer algebra system (called Meth.js). I’m hoping it soon gets to the point where I can just feed it a couple of equations and some input with units, and it’ll figure out any other value I’d be interested in calculating.